Bodywork update
Few pictures from the garage.
Looks like the original area of rust on the roof had extended a little further down so having the screen out has definitely  saved some future heartache. 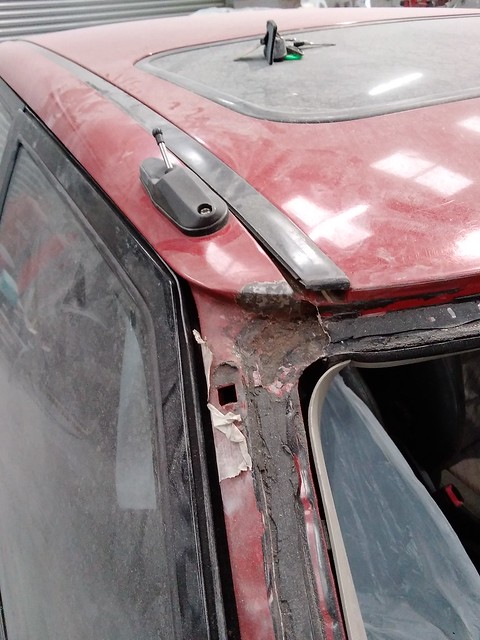 The area of rust at the base of the A pillar had not extended too far so the repair didn't throw up any more problems. 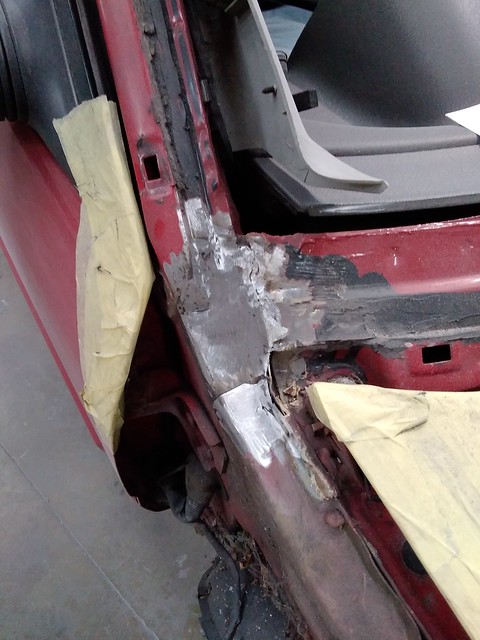 Windscreen broke on removal so a new one is being sourced - Rimmers only do a green strip at the top of the screen whereas mine has a blue strip. Garage also think they can get it cheaper than £350 that Rimmers charge.

Also discovered before taking the car to the garage that the plenum gallery was covered in limescale from water from the windscreen washer jets ( I live in a very hard water area) this will also be cleaned up whilst they have all the grill and bits off.
Currently waiting in queue for the paintshop to do there bit.
1991 Rover 416 GTI Auto - Flame Red
Top

More ugly stuff uncovered under the windscreen sealant.
Looks like the windscreen fitter did a bit of damage to the paintwork when the windscreen was replaced all those years ago and our good old friend rust has had a bit of fun in the intervening years. Luckily it's surface rust with no major loss of metal. 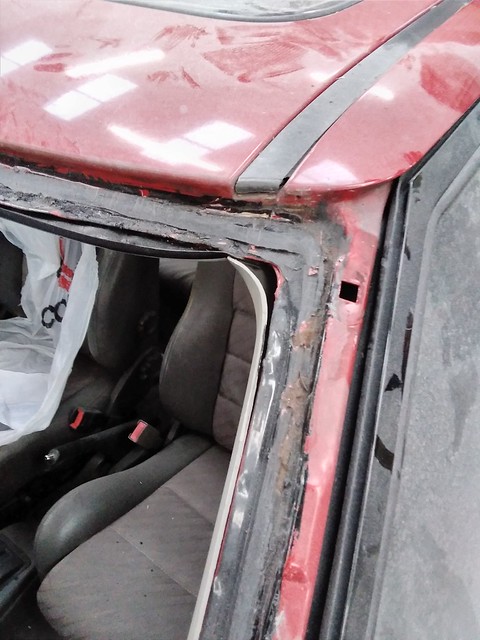 They've also managed to find a new windscreen with a blue sun strip at about 60% of Rimmers price.

That mirrors my experience about 10 years ago. The (young) Autoglass guy who did my first windscreen replacement wrenched the side trims off,
and evidently damaged the clip apertures such that the next time my screen needed attention they had corroded around their edges, as well as in
the areas you show. He also bounced a dent into my bonnet!

I probably made a mistake in de-rusting and re-painted with Halfords rattle cans myself, as a couple of years after fitting the current screen, it
started letting water in to either footwell, depending which direction the first turn was after starting a journey. I suspect it's the paint that has
let go. It has been tucked away for a while now, needing corrosion repairs. Being in Herts like you and lacking a local sympathetic bodyshop,
I'm following your story with interest!
Top

Finally got the car back today - great to see it in the Autumn sunshine. 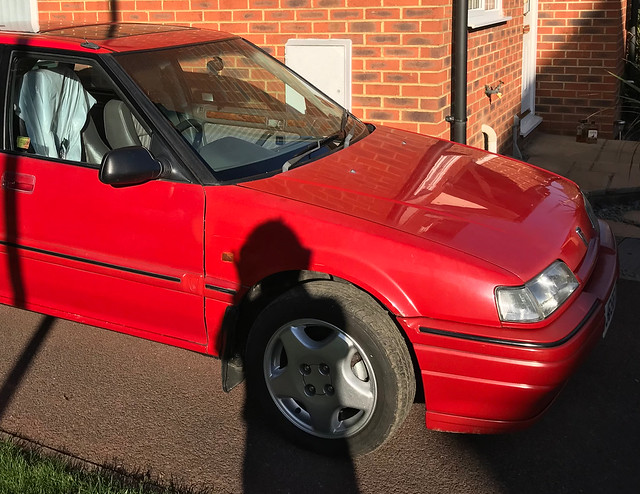 Not much to show for all the time, money and effort except a new windscreen, new A post finisher, new top windscreen seal , that actually fits , and some nice paintwork on the edge of the roof.

Still at least it's all now done. 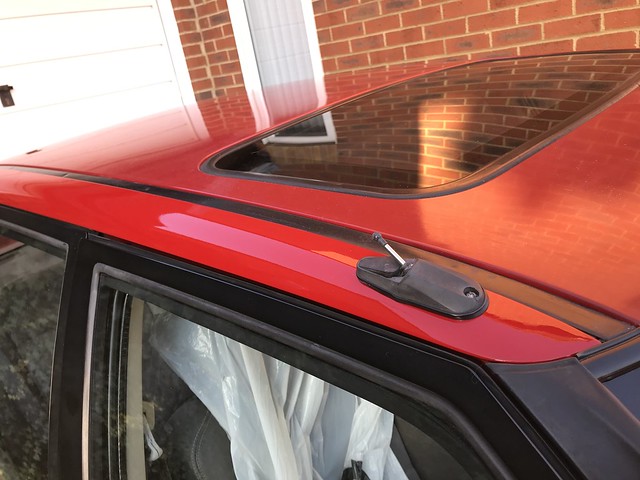 Needs a through clean inside and out ,

Does anyone have any tips on smartening up the A pillar finishers. I now have a new and old finisher so I need to spruce up the old finisher to finish off the job.
1991 Rover 416 GTI Auto - Flame Red
Top

Plodder wrote: ↑
Wed Nov 04, 2020 10:21 pm
Does anyone have any tips on smartening up the A pillar finishers. I now have a new and old finisher so I need to spruce up the old finisher to finish off the job.

I'm pretty sure Johnny Sawn "went through the grades" on wet and dry to get good A-pillar trim. I expect he started high though - 1200 to 1500. If you went as low as say 800 you might scuff the surface to the point where you can't get it back to smooth again. I'd also suggest using it wet rather than dry and see what happens.

You could always PM him through the forum to ask him what grades he used to do it.

Whatever you do, you might have to do it to both the old one and to a lesser extend the new one, so they looked the same when finished.

Mildly abrasive substances could also be used to get the perfect surface finish - Autoglym super resin polish, toothpaste (believe it or not) or Brasso all have the right level of abrasive content to polish plastic such as this. I expect toothpaste will probably leave you with a dull satin finish and the likes of resin polish will start to give the plastic a shine. Same as using wet and dry I suppose - stop at the finest abrasive particle size where you get the look you want. They were never "shiny" when new - repeated washing over decades tends to make them very shiny. They were a satin ("eggshell") finish.

I expect if they're really bad you could remove them and spray them (rough the surfaces 800 grit, adhesion promoter, plastic primer, and a top-coat of satin black) but it would have to be a perfectly flat and smooth final spray so they looked original. Probably a job for a body shop or vehicle restoration company used to do this kind of thing - a spray gun will probably get you a super-smooth finish.

If your "old one" is badly pitted, this might be the way to go - you could fill the surface imperfections with plastic filler before prepping and then putting on each layer of paint to both trims, so they looked the same.
Rover 216GSi K reg. Flame Red over Tempest Grey

crepello wrote: ↑
Mon Oct 26, 2020 8:11 pm
That mirrors my experience about 10 years ago. The (young) Autoglass guy who did my first windscreen replacement wrenched the side trims off,
and evidently damaged the clip apertures such that the next time my screen needed attention they had corroded around their edges, as well as in
the areas you show. He also bounced a dent into my bonnet!

I probably made a mistake in de-rusting and re-painted with Halfords rattle cans myself, as a couple of years after fitting the current screen, it
started letting water in to either footwell, depending which direction the first turn was after starting a journey. I suspect it's the paint that has
let go.

Having removed my own A-pillar trims for a re-spray, I found the clip apertures coated generously with windscreen bonding sealant in neat rectangles (taller than they were wide, so about 50% of the body colour on the A-pillar was obscured). I wonder if this is a trick to prevent such problems - in which case, which windscreen installer know about it and which ones don't? I obviously had a benevolent windscreen fitter at some point, and their "fix" lasted me all these years...
Rover 216GSi K reg. Flame Red over Tempest Grey

So what are the next steps ?
Probably the following:

Rust proofing to protect all the work/money I’ve spent on it this year.

Replace front /rear suspension rubbers and track rod ends - most are original and hopefully this will improve the ride.

Repair offside electric wing mirror mechanism - damaged when I clipped the wing mirror of a car going in the opposite direction.

Overhaul both drive shafts - the o/s wheel bearing got mega hot when I had problems with the sticking brake callipers so heaven knows what state the grease is in. Ive also read there are problems with the shafts breaking due to corrosion.

Other nice to do but maybe not so important at this stage:

Repair cloth seat panels on rear seat as these have got a bit saggy.

Replace both black wing mirrors with colour co-ordinated wing mirrors - the only non original change I intend to make.

Work out a way of temporarily fixing the rear wheel spats so I can fit them when displaying the car and remove them easily so i can stop the rust from playing havoc under them.

I have acquired a rather large box of bits this year that should keep me going for a little while.

I would like to think that most of this work will be done in the next couple of years but I’m not going to beat myself up trying to achieve it .

But it would be great to have the car looking more like it did on the day I brought it all those years ago.
1991 Rover 416 GTI Auto - Flame Red
Top

No updates to the car of late as I am in the process of relocating to sunny or is it rainy Devon.
Brought the car down to Devon today having acquired a lock up garage to store it in.
220 miles in one go in damp/drizzly conditions without so much as a missed beat, more miles in one day than its done annually in recent years.
Still we’re back together again so work can reconvene
1991 Rover 416 GTI Auto - Flame Red
Top

That's a nice long list to keep you busy over the winter!

An interesting read. I need to start cracking on with my 216 GSi.
Topcat Tomcat (aka Conductorwomble)

First up was a new electric wing mirror.

Apart  from losing one of the screws inside the door the replacement fitted fine. Although  the mirror seems to give me more of the side of the car than the road than the previous mirror, despite being adjusted to the limit , so it might need to come off again to see if there is any other adjustments I can make

Next up was a new nearside indicator unit

This was to replace one that had a cracked lense and the bracket repaired during a recent visit to the body shop.
I found one on ebay and it should have been a quick changeover but after fitting I still had a big gap around the back and top of the indicator. 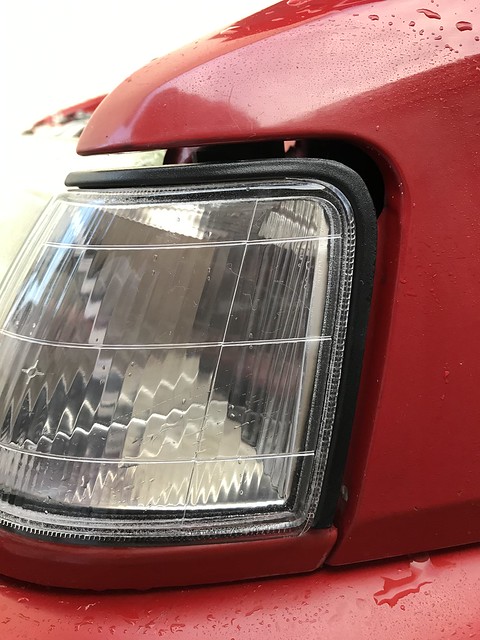 Close inspection looks like the bracket inside the wing has been deformed , probably as a result of a prang 23 years ago, this has lowered the position of the indicator securing hole. 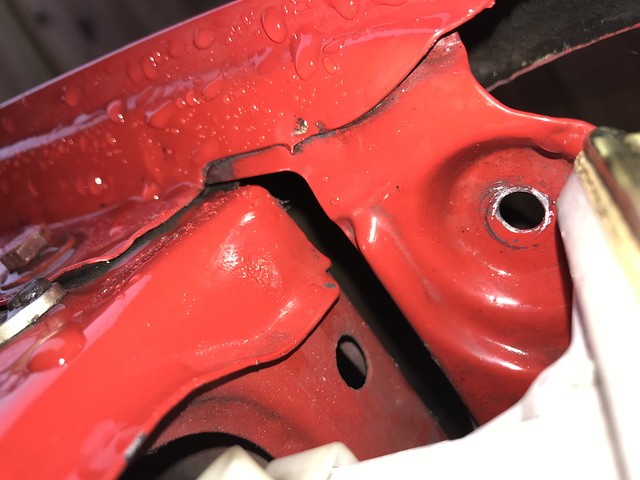 At the risk of damaging the wing aesthetically trying a bend the bracket back into position Ive left the bracket as is and will elongated the hole.

A new wing maybe in order when I have the car resprayed in the future, maybe!

Next up was the badges on the rear door cheater finishers

I had acquired 2 Viking Rover badges to fit to the silver backing plates but after removing the cheater finishers from the door and seeing how permanently the badge backing appeared to be secured through the cheater moulding I decided to buy a couple of cheater finishers with the badges attached from an online breakers yard. These looked great until I came to fit them and then I realised that they had been removed roughly and the bosses into which securing screws were fitted were both broken off.
Back to plan A - I drilled out the plastic pins / glue on the existing badge backings to remove them from the cheater mouldings 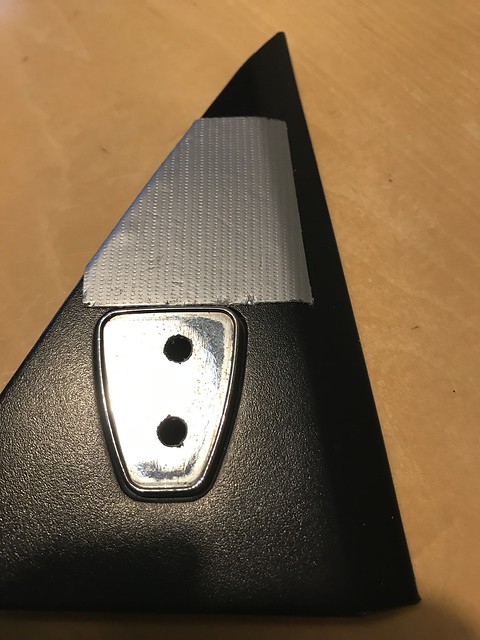 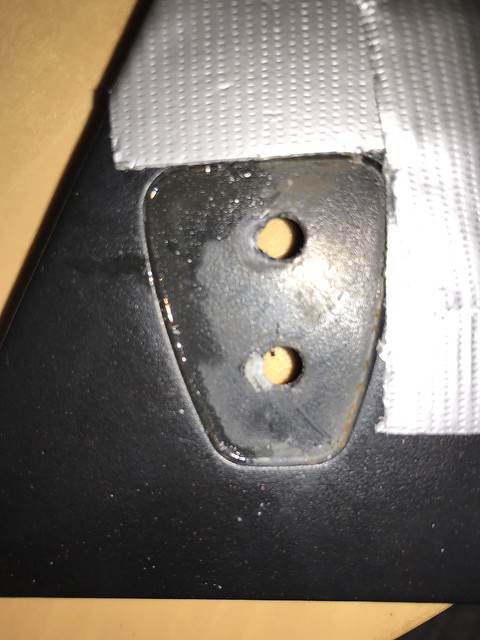 The badges I had had no pins in only holes so I glued a couple of silver steel pins into the back of each badge and araldited the badge between the 2 holes on the cheater finisher and then filled the holes I'd drilled out with araldite.
A bit of a belt and braces approach but hopefully they are securely attached. 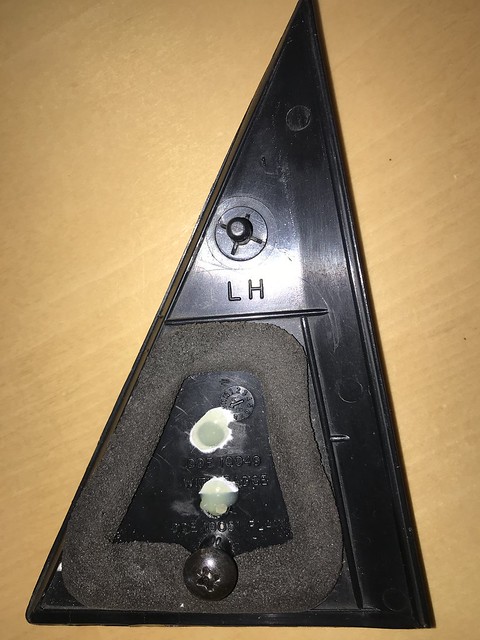 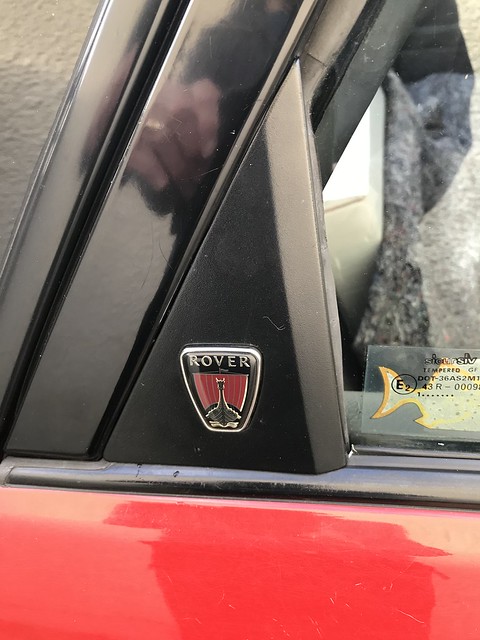 The flickering clock display turned out to be 2 broken solder joints where the spade connectors from the electrical socket join the printed circuit board in the clock .
Obviously broke when I removed the plug from the back of the clock

Finally after much polishing and picking with the finger nails I’ve managed to remove the tiny white marks that were left on the rear o/s door and roof following the work carried on the A pillar.
I'm sure the company would have sorted this out for me if I’d taken it back to them but as I’m relocating  this wasn't possible.
I now have a very shiny roof - although still with the markings left from the period under the car cover.