Off-topic and topics which do not fit in elsewhere.

Was Stuart Hall driving it ?

Stuart Hall as in the presenter of 'Its a Knockout' and famed sausage shoplifter, also a fan of American Iron.

A lot has happened since the last update.

After the trip to the seaside* I fitted my spare second-hand timing belt tensioner pulley. It too is a bit noisey but nowhere near as bad as the one it replaces. 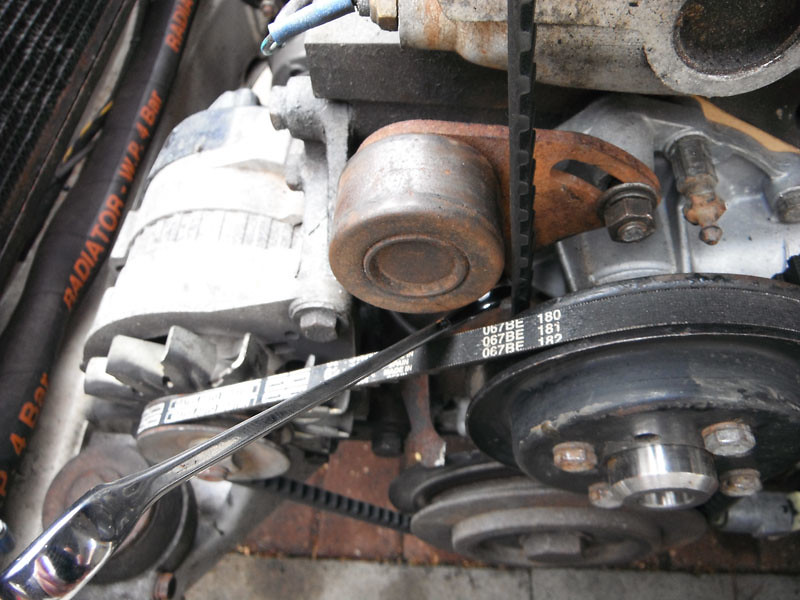 Been spotted several times and posted on that there Facebook that I don't use.

Decided to remove the rear screen to fix the rust and found MORE rust, as per usual. 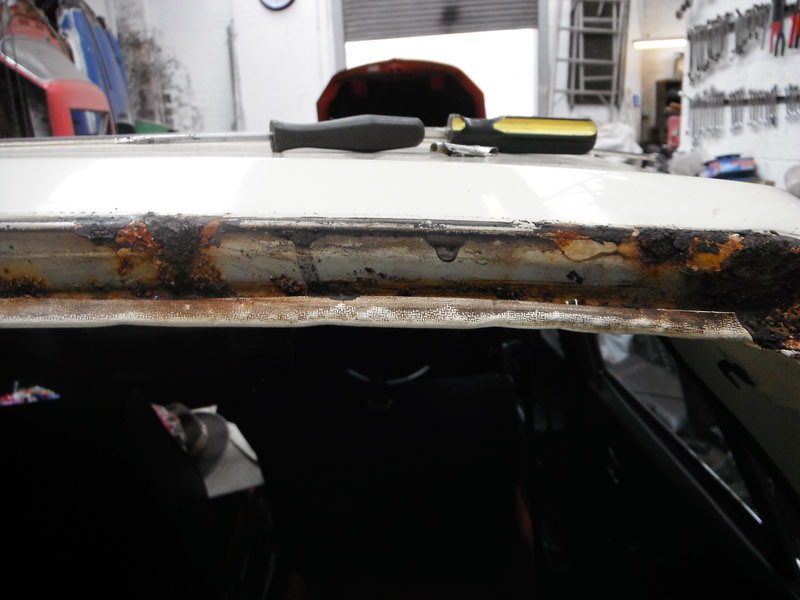 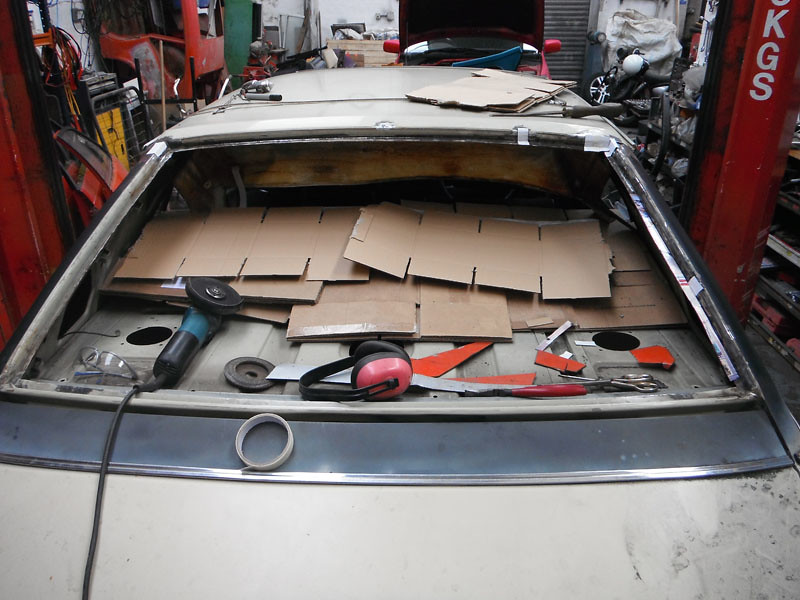 With that done, and just the one fire to put out thanks to an errant spark and some plastic I had hidden in the boot and forgotten about, I set about sorting out the rear lights properly. 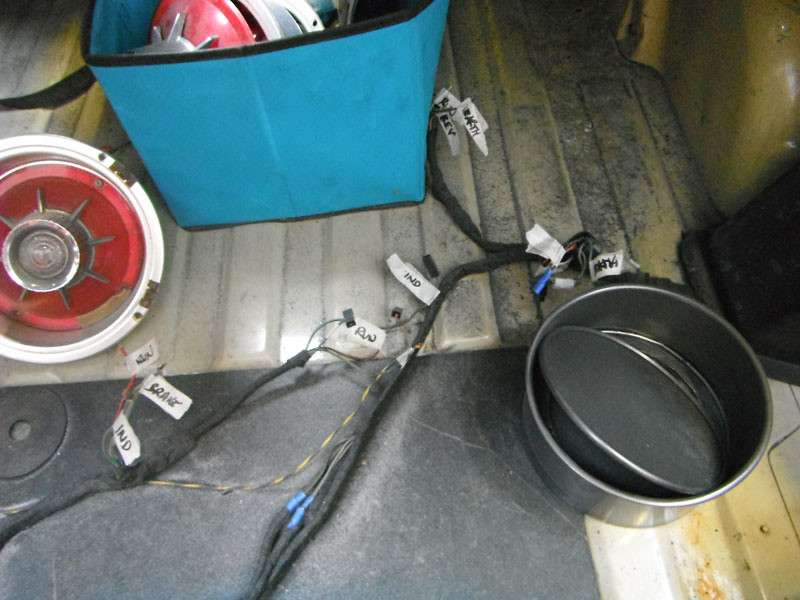 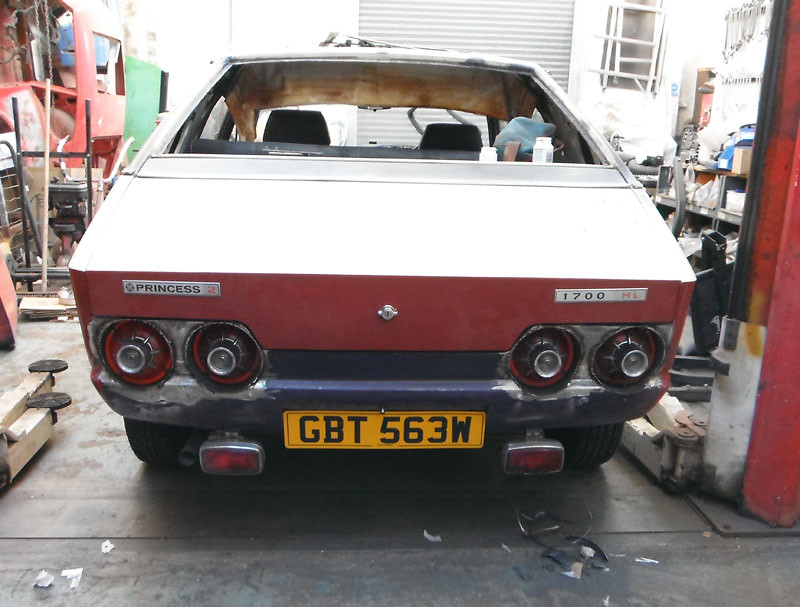 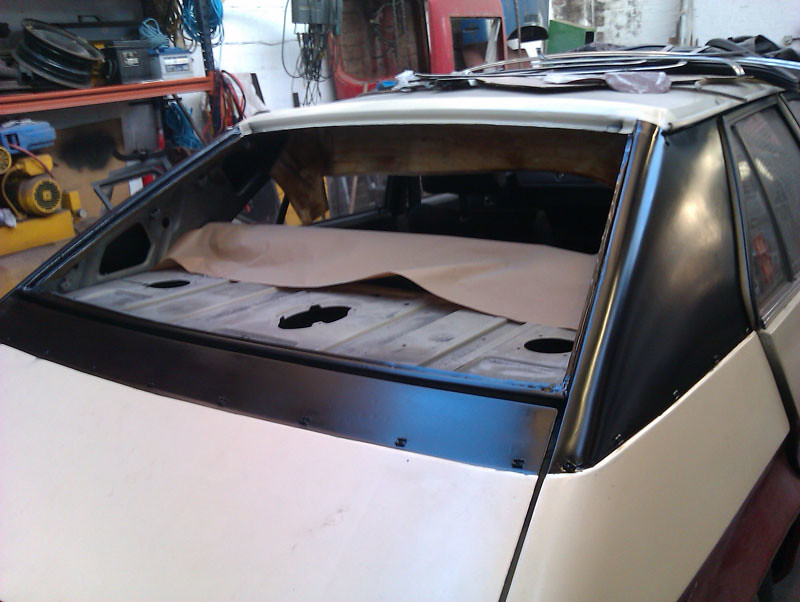 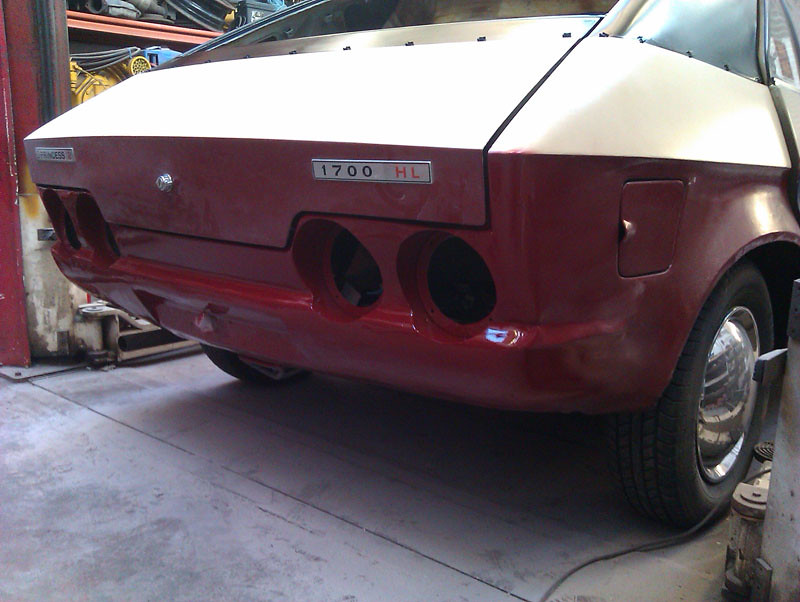 Sorting out the new lights by trimming them where needed to fit. 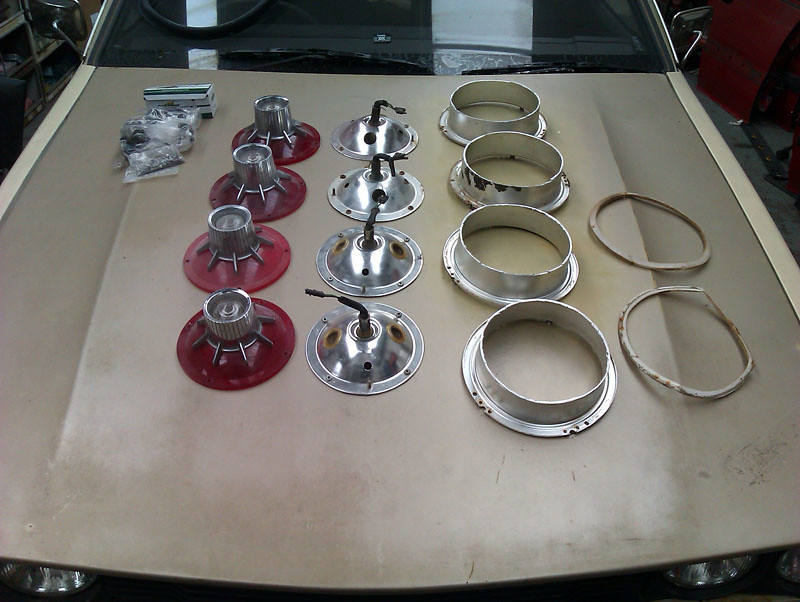 Fitting new high level indicators, which are actually Austin A30 sidelights with the lenses painted orange inside. 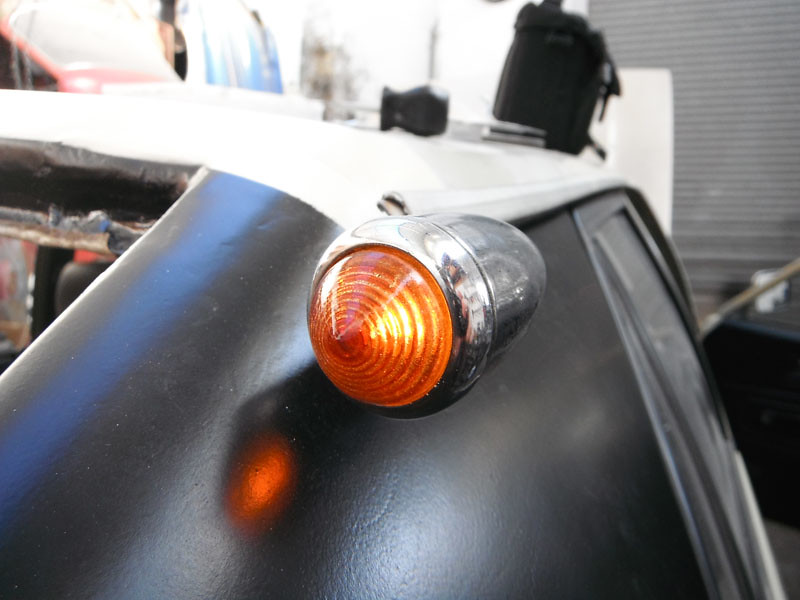 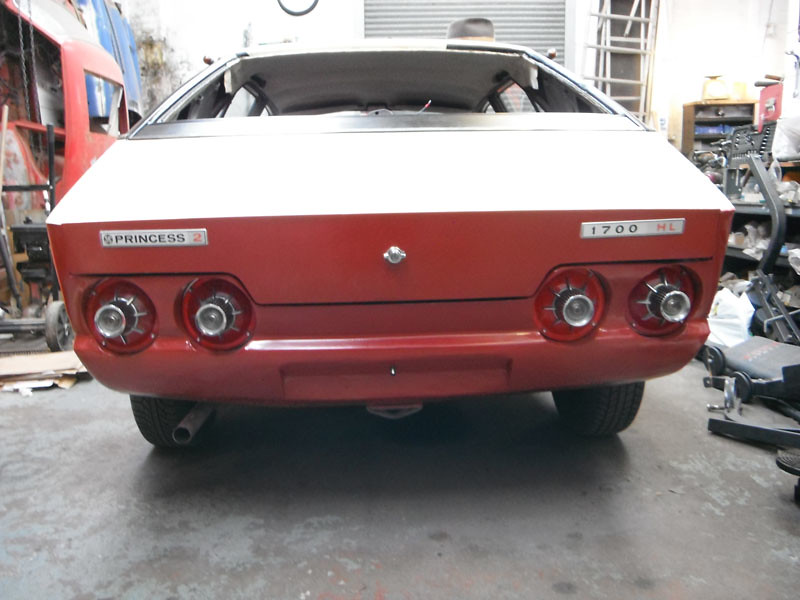 Rear screen refitted with Mk1 stainless trim rather than the Mk2 plastic insert. Difficult to fit the trim too, I can see why they switched to the plastic stuff later. 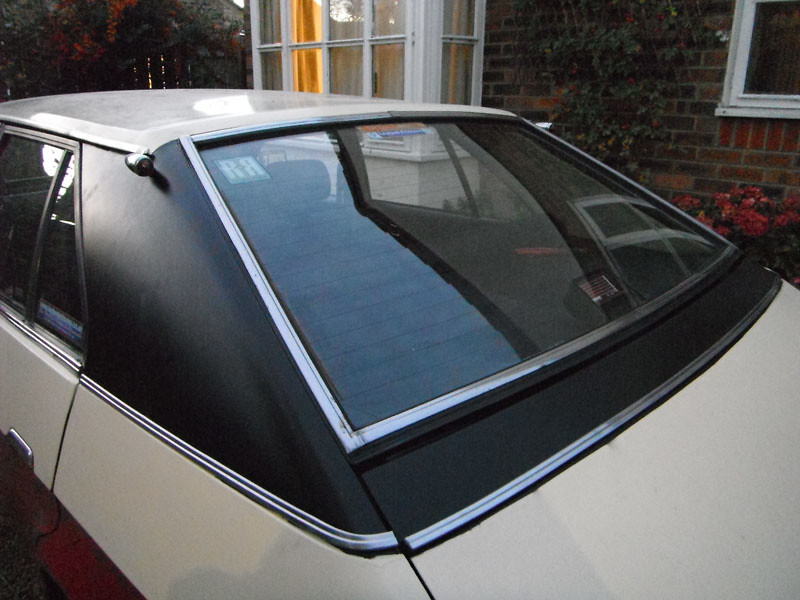 New rear lights are nice and bright. 1964 Galaxie, if you wonder where you might have seen them before. 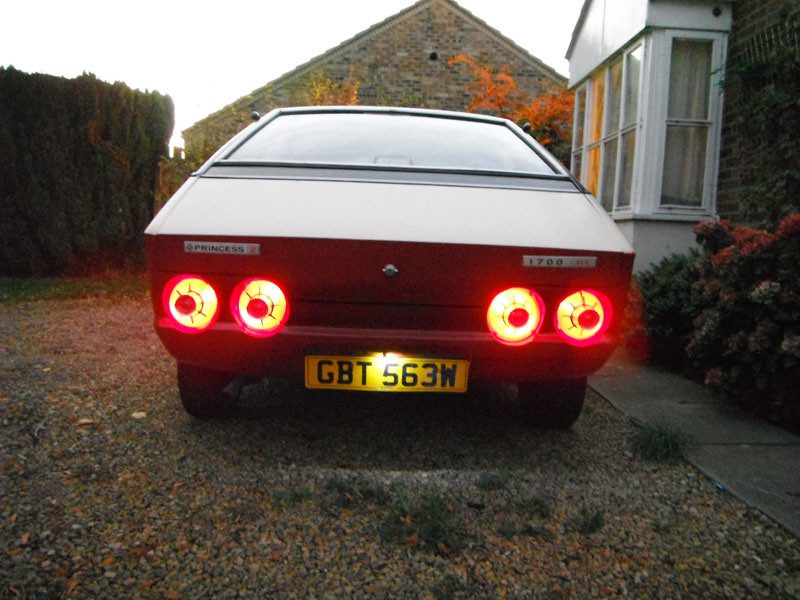 Treated it to some fresh paint on the steels and some brand new Uniroyal tyres. Also switched to the factory wheel trims since I fancied a change. Then the experiment began.

Week 2
Occasional misfire/stumble under load. Couldn't trace the exact cause so waited for it to develop.
Some underseal fell off when doing the weekly arch hose out and highlighted this rust. New fuel filter fitted
Occasional misfire/stumble became progressively worse. Cleaned out the carb which had some sediment and particles in it. Still couldn't find the root cause.

Spotted a tidy unmolested Mk2 Golf when out on errands. FTP. Car died coming off a roundabout, float in the carb stuck so it kept flooding. Roadside partial dismantle and rebuild of the carb undertaken. No point calling for recovery since I was pretty much in sight of my house, just a bit too far to push, so worth trying to get it going again, which we did. Car reluctant to drive with any revs until heading home when it suddenly behaved perfectly normally. Still couldn't identify the cause for this.

Week 4
This is where we are now. It's not going well. Potentially cause of poor running found to be a chunk of gasket having blown out causing a massive vacuum leak, once replaced with fresh gasket this seemed to resolve the issues. Victory was short lived. Today the condenser died and burned the points badly enough that they're no use either. Car will only run when cold as a result, once warm the condenser just wreaks havoc. Electronic ignition ordered.

Rear suspension noticeably firmer and bouncier than it should be indicating that the rear displacers are in need of re-gassing. This will have to wait until next year.

Fortunately I need to do very little driving so the experiment is not yet at an end. If the electronic ignition solves the running problems we'll be back in the game. I've also got a freshly rebuild carburettor heading my way courtesy of a very good friend who does very good work. I did fully intend to start the challenge at the worst time of year to give me and the car a proper trial by fire and it has not disappointed on that front! I'm not about to give up on this challenge yet, if nothing else it's making me appreciate just how easy the R8 is to live with by comparison.
Current Fleet:
1980 Austin Princess 2 1700 HL
1994 Rover 414 SLi
Top

Hell of an update buddy, some graft gone in there over the weeks.

Another big update for you then, since I've been lax updating here.

After the failure of the condenser, I bought and fitted an Accuspark Stealth electronic ignition kit. Really good instructions, very easy to fit. Since fitting this, my urban fuel economy has improved by 2.2mpg, which I had not expected. The car runs smoother than it did, which I had expected. Today was the first damp day and normally the car would be a bit stubborn about starting, so it was a pleasant surprise that it wasn't now. It was certainly a good idea to fit this kit.

The hole in the rear wing was repaired as best I could. A difficult shape to make because it curves in several different directions. I haven't applied any filler here, just paint to keep it all weathertight until it's a bit warmer and I can finish the job properly. At least I don't get water spraying up into the boot now. I refitted the front arch liners, which are a bit of a faff. This is worth doing as it protects a lot of the rot prone sections of the front wings. They do need a little trim as they catch on the tyre on full lock, a problem that it seems they all suffer from. I'm just waiting for the tyres to make an obvious enough witness mark so that I can figure out what and where to trim off. Sills and the repaired rear inner arch were undersealed which will help protect against the winter weather and salt. A little milestone was achieved when we ticked over 77k just after that fuel station shot was taken. I also made a start dismantling my spare rear suspension units with a view to getting the best pair re-gassed to improve the ride. I am having issues with the pivot shafts being seized on all of them, a common problem caused by a design flaw in the suspension themselves having two steel units going through one another that are exposed to all of the rubbish thrown up from the road. You're supposed to service them by removing an greasing the pivot shafts at regular intervals but nobody ever does. The stainless steel stonechip guards were refitted to the sills. These prevent stonechips on the doors and rear arches, while also keeping the road dirt from rubbing off on clothes when you get in and out of the car. They help the car look a bit longer too since it's another horizontal line. Seen here in Stockton's shortest parking bay. Over the course of the last six weeks the car has used 200ml (ish) of oil, no coolant, and has never left me in a position when I've had to use the Rover. In fact, during all this time the Rover had done a total of 3 miles. I was willing to let the six month experiment run to the end until making a decision, but then this appeared, so now it's up for sale. Yup! A few bits to attend to before the MoT next month and it'll be in action alongside the Princess. Now just to wait for the Rover to sell so I can crack on with Stuff. I'm definitely going to miss the Rover when it's gone but I'm very glad I owned it for a few years, definitely a car that's left a positive impression.
Current Fleet:
1980 Austin Princess 2 1700 HL
1994 Rover 414 SLi
Top

Yes. One of the inner chrome bits is a fog (red bulb), the other is the reverse. It works really well.

Here's a cold start video. Okay so it wasn't Big Coat cold, but there was snow, so it's close enough.

Return to “The Lounge”